It’s hard to understand why Atlanta’s debate scene was markedly different from those in Detroit, Houston and Westerville. There was virtually no participation by those who lived or worked in the area and a small police presence compared to the other selected venues.The areas where protesters and others could stand was not decided on in advance and was changed three times while I was there. By the time large groups representing candidates and issues arrived we were allowed to stand in two grassy areas dividing the street. These areas were comparatively small and became quite crowded.This may have discouraged participation by the media. There seemed to be less local coverage and no national coverage outside the debates. Perhaps the media was too busy with impeachment proceedings. Perhaps holding the debates at a commercial establishment as opposed to a university or large city setting put a damper on things.

The debate in Atlanta did not start until 9 PM. As a result, we all stood in darkness when the sun went down. It became chilly and I was glad I had decided to wear long underwear. It was, after all, late November. Luckily, there was good overhead lighting. A lovely addition to the debate scene was a high school band that marched in the street and then settled in on one of the grassy areas that divided the street. I know I was keeping the beat with my whole body as they played. Here’s a photo of me with the marching band behind me in the street. 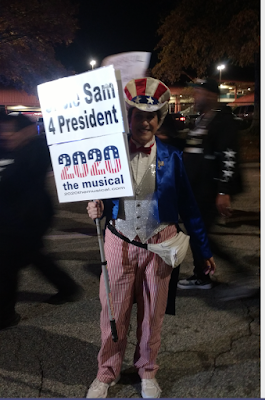 After flying down to Atlanta to participate in the goings on, I was disappointed by a reduced media presence. Even so, I had fun talking with people, engaging in some interviews with, among others, The Carpenters Apprentice from San Antonio, TX, Ricky Davis’ Ever Real Enterprises, Valerie Curry of Ms’ Curry’s Neighborhood and Archith Seshadri. As usual, I was the subject of numerous photos by others at the debate scene. I ask people when they post to hashtag 2020themusical.com.

I attended a debate watch party with Ricardo Mireles who is the executive director of a charter school in Los Angeles. He was there with a contingent from Tennessee, Wisconsin and Massachusetts to demand more support for charter schools.

I am looking forward to seeing some of the people I visited with in Atlanta as well as other debate locations next month in Los Angeles.

Posted by Carol Dunitz at 2:26 AM No comments:

Uncle Sam tells us scientists predict if emissions continue to rise unabated, the Arctic could be ice free in the summer as soon as 2040 while ocean and air temperatures continue to rise rapidly. Reference "Simple Times Gone By" at 2020themusical.com (https://youtu.be/hAImCZK6B4c).

Climate change is real and we need a leader who will help us fight this most serious of issues.  #GreenNewDeal #FireDrillFridays #GlobalWarming #ClimateChange #2020TheMusical 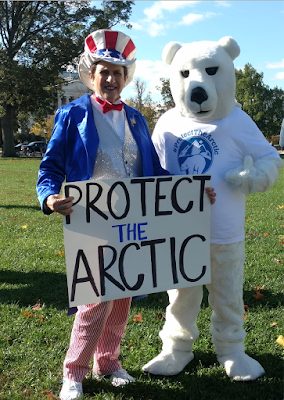 Posted by Carol Dunitz at 6:13 AM No comments:

Communicating Across the Political Divide

Political polarization may have reached its worst level in the United States since the Civil War. Enter organizations like Better Angels. Founded in 2016, Better Angels strives to give people the skills to have meaningful conversations between Liberals and Conservatives.

I attended a Better Angels Skills Workshop at St Paul United Church-Christ in Saline, MI today. The seminar leaders, Sarah and Maggie, led the group through three hours of instruction and interaction. 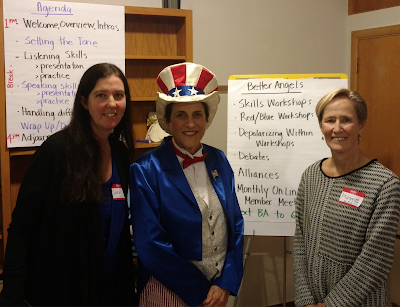 The session handout addressed four skill sets: 1) setting a constructive tone, 2) listening in a way that makes the person you are addressing feel heard, 3) speaking in a way that helps the other person hear you, and 4) handling difficult moments. Each person was paired with another individual from the workshop and participated in communication interactions to use what had previously been discussed.

I think most people who attended the seminar found it to be productive. Since I have a Ph.D. in Speech Communication and Theatre, the ideas were not new to me. Nonetheless, it was interesting to see concepts explained from a slightly different perspective. This seminar addressed communication with reference to political interactions with those whose beliefs are contrary to yours.

I met some interesting people. A few attendees came up to me and introduced themselves, letting me know that they had been following me on Facebook or had seen me at a political event they were at. One man had attended an event where I presented six weeks earlier.

Posted by Carol Dunitz at 8:45 PM No comments: