Happy Birthday Baby now has over 6000 views on youtube! It is one of twenty songs (and the only one that does not deal with politics) in 2020: The Musical.  Do you know someone who's having a birthday? ‘Bet they’d like to receive Happy Birthday Baby as a virtual birthday card. https://youtu.be/dtI0lj1JCT0 (Click link to view) 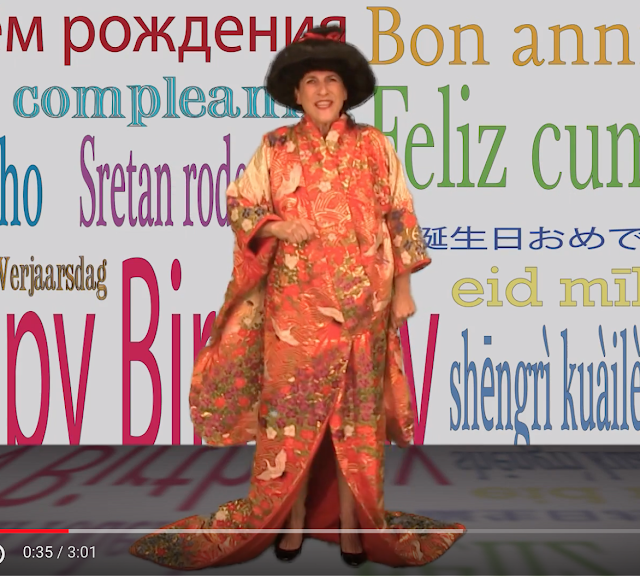 Posted by Carol Dunitz at 5:10 AM No comments:

In my last post I referred to being the lone advocate in the free speech zone for the Des Moines IA Democratic debate.  From 12:30 to 3:30 pm I patiently walked around the area hoping others would join me.  During that time I was interviewed by Mike Crute. Mike owns Wisconsin Resistance Radio/WRRD - 1510 AM in Milwaukee WI. He also has a Facebook page, The Devil's Advocates Radio. Today I unearthed video from our meeting that was posted on Facebook. 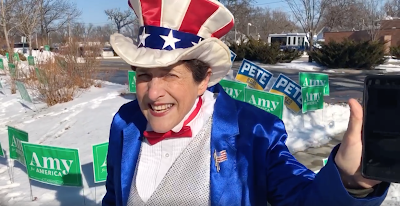 
I was interviewed by Brian Mastre from NBC, Channel 6 News. A short clip from that interview was included in a story aired by that network.
https://www.wowt.com/content/news/Preparations-protests-underway-for-7th-democratic-debate-at-Drake-University-566985711.html 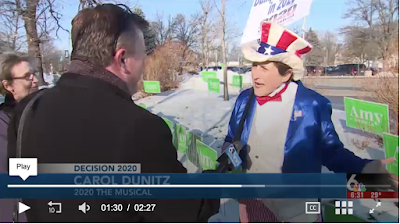 During this interlude when I manned the area on my own I also met photojournalist Jack Kurtz who took a couple photos which he emailed me today. 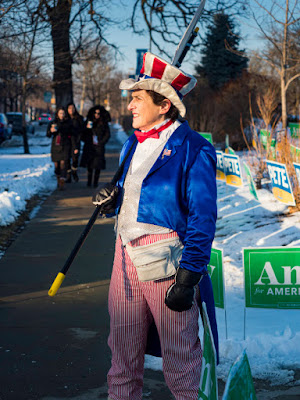 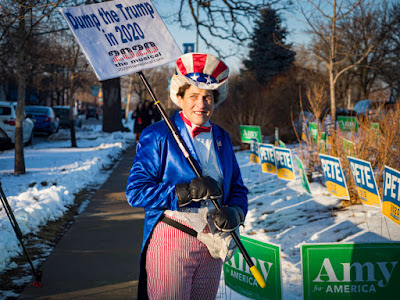 I really appreciate it when media representatives share their work.
Posted by Carol Dunitz at 9:53 AM No comments:

The rules of the game. When you attend a Democratic debate, there is an area that is demarcated as the free speech zone. This is where protesters and advocates are allowed to stand. For the debates, Democrats and Republicans are typically given separate areas in which to congregate. There is usually a significant police presence.

The game started slow. The first photo taken of me happened even before I got out of my vehicle (WAPR - NPR).  https://www.apr.org/post/democratic-debate-iowa-edition 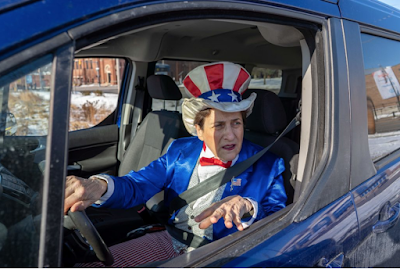 For those old enough to remember, I felt like Jesse White, the American actor who appeared as Ol' Lonely -- the repairman in Maytag television commercials from 1967 to 1988. I stood (and paced) in the free speech zone from 12:30 to 3:45 PM all by myself (!), surrounded by a sea of Pete Buttigieg and Amy Klobuchar signs planted in the ground. I was able to speak with and be photographed by representatives from only three media during that time. 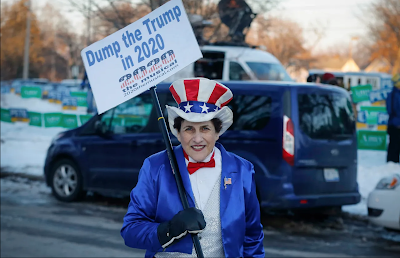 Drake University was not in session for the winter term yet so while I spoke with a few people who walked by, there was little foot traffic. It was demoralizing and it was cold. But I was armed with six layers of long underwear and I stood my ground. I'm glad I did.

Just before 4 PM all Hell broke loose. Reporters and photographers appeared. A man with a large, 15 ft.tall blow-up chicken of Trump started to assemble his 3-D caricature, and a huge contingent of Amy Klobuchar supporters appeared. From that point on I was photographed and interviewed by a barrage of media representatives. As a result, I appeared on Channel 8, the local CBS station https://www.kcci.com/article/rallies-protests-surround-democratic-debate-in-des-moines/30524469, and numerous NPR radio stations like Illinois -NPR.  https://www.nprillinois.org/post/democratic-debate-iowa-edition#stream/0 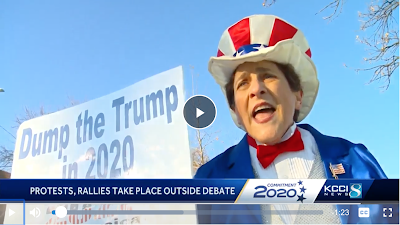 Photos appeared in more newspapers and online sites across the county than one could find or count like the Akron Beacon Journal.  https://beaconjournal.com/zz/news/20200114/top-moments-democratic-candidates-spar-in-iowa-debate 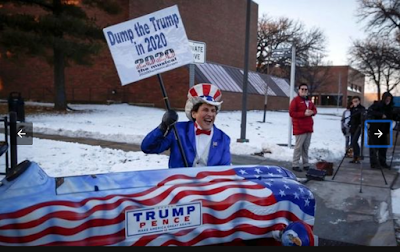 About 4:30 PM, two men appeared on a tractor specially tricked out to promote Trump. At that point I was talking to a reporter who cautioned me not to go over to where they were. I playfully grabbed his arm and said, "Come on, let's go," and he followed me. Photographers on the scene instinctively knew a photo op was in the making. Interestingly, the tractor operator backed off. It appeared he wanted to avoid a confrontation. While we did not interact with each other much, at least a dozen photographers captured the scene with me singing a verse from a 2020: The Musical song and waving my sign around. 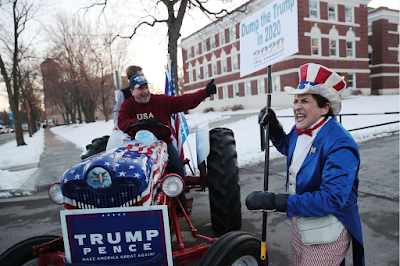 By 5 PM the sun had retired and it was getting colder. I was finally feeling the bite of the cold and realized it was time to close shop. I knew of four scheduled debate watch parties and had planned to attend at least one, but that was not meant to be. I spent the evening in my hotel room watching the Democratic debate and collecting media coverage online from my time in the free speech zone. Stories actually started to appear before the debate even got started.

This time at bat I managed to hit the ball once again out of the stadium. :)

Posted by Carol Dunitz at 7:46 AM No comments:

When Does Uncle Sam Look Like the Pillsbury Dough Boy?

I drove to Toledo OH today. The high temperature was 46 degrees but it felt colder because of the wind. Trump was holding one of his rallies and I read on Facebook that a number of Democratic groups were getting protestors together in response. One of these groups, Refuse Facism, posted on Facebook last week and it caught my attention. I posted that I was going and invited others to carpool. No one responded so I made the hour trip to Toledo on my own.


There were thousands of Trump supporters lined up to get into the arena at the Huntington Center where Trump was to speak. A large police force with bicycles was present to separate Trump fans from his detractors. How many detractors? A few hundred.


Photographers were out shooting. And as usual, many took photos of me. None of them, however, were carrying business cards. In the future I am going to have to have a pen and paper on me so they can give me their names and the media with which they are affiliated.  With lots of photos being taken, sans interviews and business cards, it is virtually impossible to track coverage.

I had four layers on from the waist down and seven layers on my torso. Frankly, I have no idea how I squeezed so many layers under my Uncle Sam outfit. I must have looked fifty pounds heavier than usual. I believe Uncle Sam resembled the Pillsbury Dough Boy. You be the judge. Here's a photo taken by a Toledo Blade photographer taken shortly after I arrived. 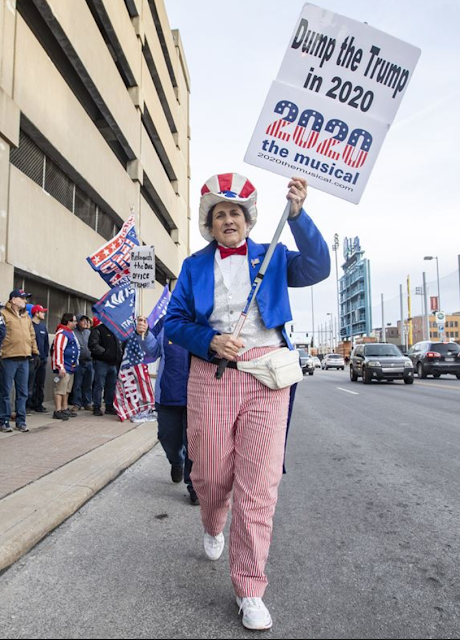 Photos by photographer Larry N. Nash really give a sense of how charged the environment was. Thanks to Drew A. Doblinger for forwarding these photos posted on Facebook. 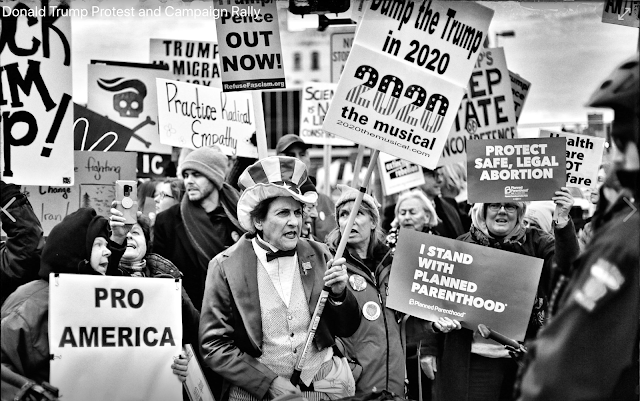 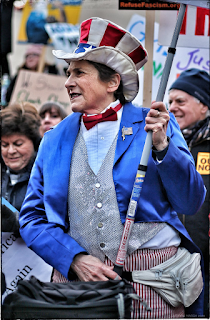 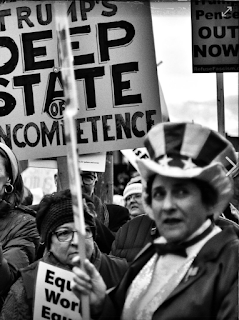 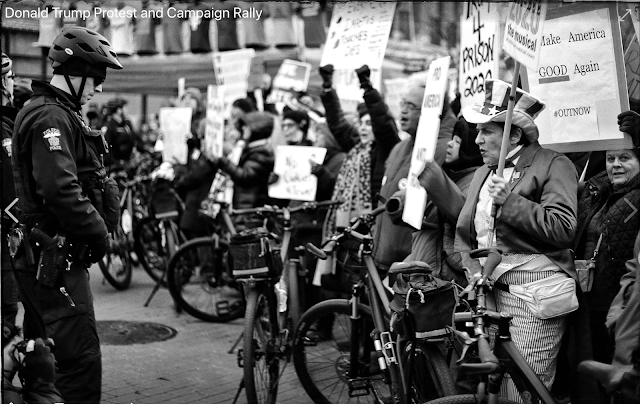 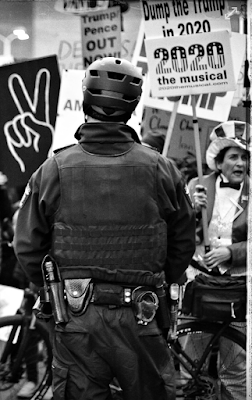 A number of people approached me who I had met at other political events. One man with whom I spoke recalled our meeting in Westerville. I responded by telling him that the photo that was taken of him and his wife with me had been shared on Facebook multiple times. He was delighted with that news. Drew A. Doblinger (meanpeacerevolution), a political artist and activist, gave me his business card (the only one I received there), telling me he had posted a photo of me he had taken at a conference in Lansing MI and I could find it on Instagram. Here it is. 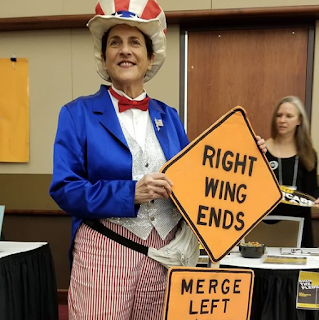 The next debate is in Des Moines IA next Tuesday. The forecast calls for a high of 32 degrees, low 22 degrees. Brrrrrr.  I am headed to the store to buy more thermal underwear. I should be able to use it again in Manchester NH on February 7th. Oh the challenge of battling winter weather without a coat!

Posted by Carol Dunitz at 8:06 PM No comments: