The Los Angeles Democratic Debate started at 5 PM Pacific Standard Time. That's the usual 8 PM start time for the East Coast. What it meant was the debate scene time line was sandwiched into about three hours. I actually arrived at about 1 PM when Warren backers and a few advocates for charter schools were present.

By 2:30 there were throngs of supporters for all the major candidates. There was a group advocating for immigrant rights with two large red air balloons and a band playing Latin tunes which drew attention. But the largest showing was for charter schools. A charter school band followed by what seemed like every charter school attendee in Los Angeles made the scene. It was very impressive.

The press was, of course, on hand, but I did not see the national presence that there has been at some other debates.  I was interviewed by Angie Crouch (NBC-LA), Jason (L.A. Times), Ben Kawaller (L.A. Times), David Thomson (Radio France International), Toshihiko Ogata (The Asahi Shimbun - Japan), Tian He (Sinovision - China), Vladimir Lyubushko (Russia - Voice of America), John Hotchkiss (Be Less Stupid), and Josef Avesar (Surviving Peace). There were others I spoke with but they were not carrying business cards so I can't list them here.

It is most often difficult to track all the publicity one receives. One of my daughters in Ann Arbor received an email from a friend in LA who wrote, "I just saw your mom on Channel 4." That's one interview that was definitely placed!

As usual, many asked to have their photo taken with me. One man remarked that he had been following me on Facebook. Here I am with a charter school supporter, Angelica Solis, before many people had arrived. 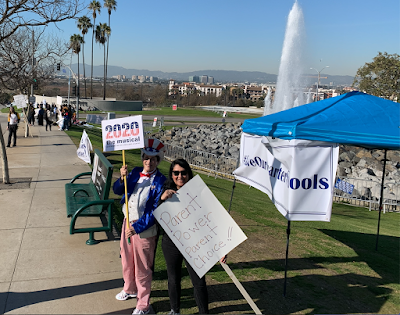 It has been chilly in L.A. over the last week, but weather for the debates was clear and sunny with a high of 68 degrees.

Tomorrow I start my whistle-stop tour across the country on Amtrak’s Southwest Chief.