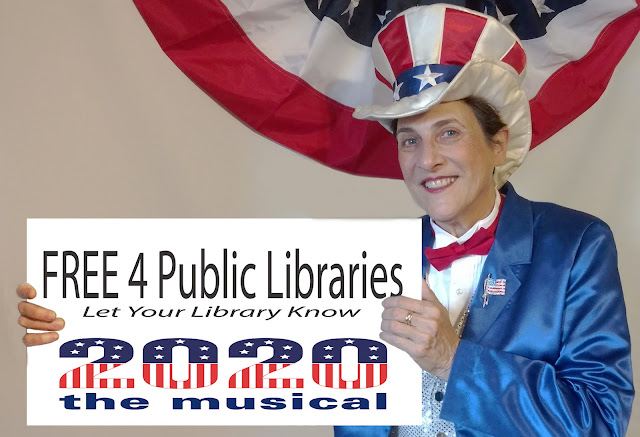 Democratic Presidential Candidate Uncle Sam is determined to educate the people and get them out to vote. Uncle Sam is not only self-funding but also offers to appear for free at public libraries across the country performing 2020: The Musical.

2020: The Musical has 20 songs about the issues we all care about. It is interactive and designed to get people involved in the current political scene and out to the polls in November 2020. “I present important issues in a fresh way that entertains, educates and demands action,” Uncle Sam says. “If you have concerns about an issue, I have a song for that. I communicate my goals through the international language, music.”

“Benjamin Franklin and Samuel Tilden understood the value of education and helped set up early public libraries in the United States. Following their lead I am determined to use our library systems as a resource to educate the voters. Everyone has the opportunity to be fully apprised of all the issues. That’s why I am donating my time to perform at public libraries across the country.”

For an overview of Uncle Sam’s campaign platform, visit 2020themusical.com. Issues addressed include:

“Republicans and Democrats are welcome. I want to hear from those who agree as well as those who don’t. That’s why there’s time between songs to get reactions from people attending.” Uncle Sam says some rousing discourse makes each performance unique. 2020: The Musical sometimes leans blue but audience response can turn it red hot.

Uncle Sam walks the talk whether being interviewed debate side by an alt-right blog or arrested along with Jane Fonda at Fire Drill Fridays. Uncle Sam aka Carol Dunitz holds a doctorate in Speech Communication and Theatre and has been researching, writing, composing, speaking and performing her entire life. To schedule an interview or arrange for a performance of 2020: The Musical, please call 734.237.6614 or email 2020themusical@gmail.com.

xxxxx
Posted by Carol Dunitz at 8:51 AM