Dance To The Music - It All Started With The Charleston

Did Tootsie Roll Industries create Charleston Chews in honor of the dance or the city? Either way, you'll want to try one when you're there.  The welcome center at the airport had a bowlful and even though I am a vegan, I had to try some without looking at the ingredients.

Typically I fly in the day before a debate and fly out the day after. That is what I did with Charleston. The debate scene here was very lively (every debate city is not the same). When I arrived seven hours before the debate it was already under way. Of course, it grew over time.  Media was encamped directly in front of the Gaillard Center. A metal barricade was set up at the sidewalk to keep advocates and protesters from the press. This is typical. Press come out to cover the debate scene.

Like Las Vegas, there was a large contingent for Biden. I also saw a number of Bernie supporters. My new friend who I met in Las Vegas, Dushime Gashugi, was stomping for Mike Bloomberg. There was a large group advocating for charter schools. Here I am pictured with Dr. Howard Fuller, the leader for the Freedom Coalition for Charter Schools with who I have spoken in Los Angeles and other cities on the debate route. 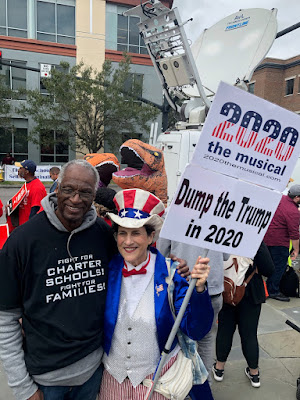 Want to see a climate scorecard for the candidates? There was a group pushing its agenda – one that I strongly believe in. Bernie and Warren come out on top for this issue. 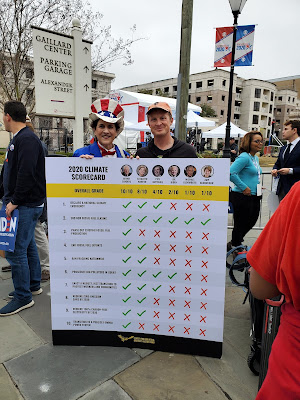 Wondering what Trumpers had to say? There was someone there from over 500 miles away who was driving his truck around and around the block. 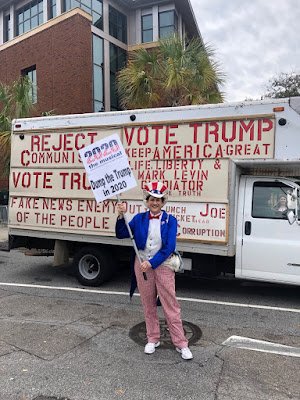 It was a happening scene. I was glad to be there but about 6:20 PM it was time to head back to my room to watch the debate.

I thought the debate in Las Vegas was very exciting and that Elizabeth Warren came out on top. The Charleston debate was disappointing. No one really presented in a way that made you feel they had won. All the candidates were talking and shouting over each other. Things could have been moderated better.

I danced to music that was playing at one point. It was not the Charleston. :)
Posted by Carol Dunitz at 11:53 AM