USA Today Article on '2020 The Musical' and Carol Dunitz


I have attended all the Democratic debate scenes during this election cycle starting with the Detroit with the exception of the one in New Hampshire. I decided to strike the Manchester debate on account of a bad snow storm blanketing the Northwest. And that brings us to Las Vegas. 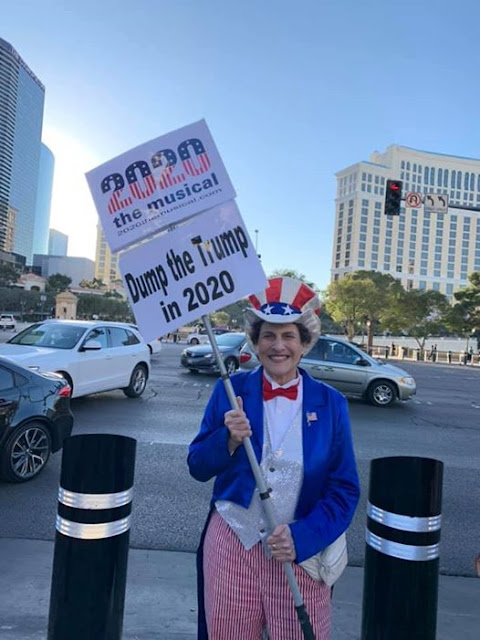 I returned last night at which point I reviewed alerts from Talkwalker and Mention. I also ran my own Google search to find media coverage.

My experience in Las Vegas was very different from other cities. Everywhere I go people take photographs of me. Sometimes they want to be in the picture with me and I am happy to oblige. I expect that many of those photos find their way into social media.

Several people were kind enough to send me the photos they took. One of them is with me and Dushime Gashugi who was there to tell people about the positive experience he has had with Michael Bloomberg. 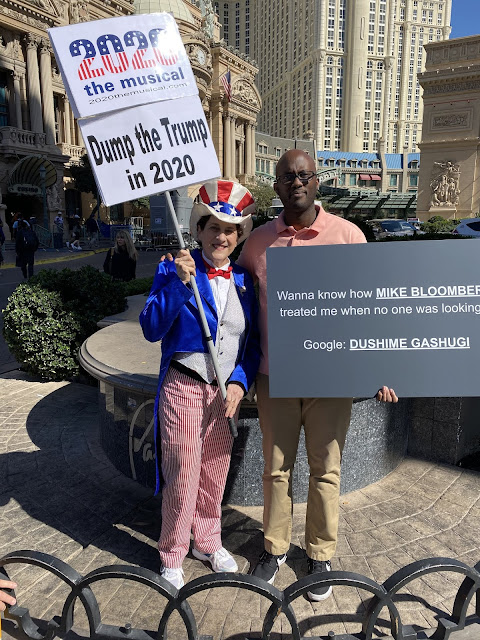 The media is generally eager to photograph me as well.  Not so in Las Vegas. Not as many photographers outside the Paris Theatre as at other sites. And not as many reporters either. I was interviewed by Ed Komenda, a correspondent from USA today who not only asked me questions but also went to 2020themusical.com to do additional research. As a result there was an article in USA Today which also appeared in many of the newspapers it works with across the country. Here is what Ed wrote:

LAS VEGAS –  Hours before the Democratic debate will unfold in a nearby Strip theater, Carol Dunitz stood outside Paris Las Vegas dressed like Uncle Sam.
She toted a sign with a message for passing tourists to see: “Dump the Trump in 2020.”
An Ann Arbor, Michigan, native with a doctorate in speech and theatre, Dunitz is the writer of “2020 The Musical,” a collection of 20 show tunes about dissecting political topics of the times: Global warming, reproductive rights and criminal justice reform among them.
Dunitz travels to all Democratic debates, promoting her musical and talking politics with anyone who cares to chat.
“Bloomberg or Sanders,” Dunitz said of her candidates, though her choice often changes.

Former New York City mayor has a chance, because “he’s more centrist,” Dunitz said. “That’s why the powers that be like him.”
---------
So while I have not come across photographs this go round, there was great coverage by media that is followed nationally. :)
I list media that includes information about me and 2020 The Musical under the Posts section. This time it includes msn.com, Yahoo News, PressFrom.info and lots of local media.

I was interviewed by several other reporters who as is often the case did not have business cards on them, which makes following up impossible. One of them was Roman Mamonov from Voice of America. Check out my cameo appearance that starts at about 1.25 into this Russian video. https://www.facebook.com/watch/?v=210919116967931

As always, it is impossible to find all references but sometimes new ones surface over time.
Posted by Carol Dunitz at 8:07 AM