Here’s a Woohoo to Charleston

The population is about 750,000 people but things are wide open in many areas. I stayed in North Charleston across for the Tanger Outlet Mall. It was a quick walk to the express to downtown Charleston, which I decided to take because I thought I might meet and talk with some city residents. Not what happened – but it did set me on an adventure!

I was surprised that the buses are much smaller than those in my hometown, Ann Arbor. I struck up a conversation with the bus driver who like everyone else I met was very friendly. Besides me, she was the only person on the bus! Sadly, the bus was having issues and after an hour and a relatively short ride I ended up not at my destination but at the place I had boarded! Enter Charleston hospitality. A supervisor pulled up in his car and took me and me alone downtown to the front of my destination, Charleston Gaillard Center. 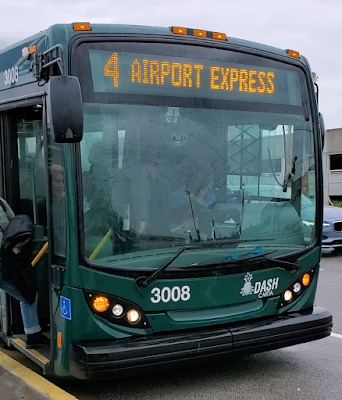 Well, that’s not where the story ends. When I left the debate scene I walked a short block to the stop for the express bus. A bus pulled up, the driver opened the entrance door and in answer to my query informed me that Number 4 would not be by for 45 minutes. She suggested I get on her bus and she would drop me somewhere where I could at least sit while I waited. When she was not able to find a stop with seating she told me to stay on her bus – that this was her last run and she would take me to North Charleston.

I spoke with a number of regulars on the bus – one of them a Trumper with whom I interacted briefly and who smiling told me could agree to disagree. Not always the response I get when dressed as Uncle Sam and sharing why I am in costume. The long and the short of it, when the official run was done, the driver drove me – not to a North Charleston bus stop but to my hotel!  I literally had to force her to accept a tip!
Posted by Carol Dunitz at 10:56 AM