I attended the Michigan Progressive Summit in Lansing today. From 8:30 am to 5 pm attendees were immersed in fascinating programming with fabulous speakers. The first speaker was Congresswoman Rashida Tlaib -- one of four women Trump refers to as "The Squad." She is an excellent speaker and provided many human interest stories that complemented the content of her remarks. 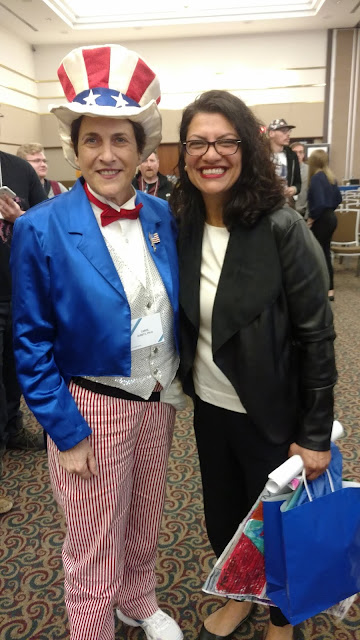 There were a number of breakout sessions. In the morning, I went to the one on Heroes Narrative -- a values-based narrative concept rooted in storytelling. Sam Inglot of Progressive Michigan  talked about using a template to create narratives that inspire activism and help build power for progressive causes.

The Lunch Plenary Speaker was Governor Gretchen Whitmer. She provided an update on what is going on in Michigan, her objectives for the state and how she planned to deal with Michigan's Republican legislature to get things done. She was enthusiastically received by the audience. 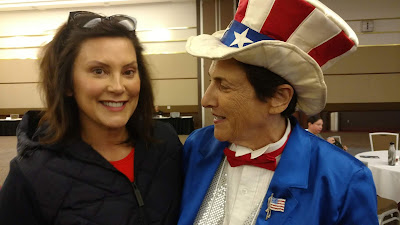 I saw an excellent film during the first afternoon breakout session, Rigged: The Voter Suppression Playbook. It documented the calculated gerrymandering, voter purges and voter fraud that have been rampant in recent years in states throughout the country.  I highly recommend seeing this documentary. Really well-researched and eye-opening!

I then attended another Sam Inglot program about PR and How to Organize an Event. While I did some of this professionally when I was actively doing marketing and PR in the 90s and early 00s, he had some useful suggestions that I may integrate into the campaign for 2020: The Musical.

If all this wasn't enough, Congresswoman Debbie Dingell gave the closing remarks for the Afternoon Plenary. She noted that we lost two great statesmen this week, former Governor Bill Milliken Sr., and Baltimore Congressman Elijah Cummings. She also talked about all the accomplishments of her late husband, John Dingell, and how so many of the issues that he had worked on have been reversed under the current administration. Debbie is actively working on many of the issues we hold dear to our hearts. 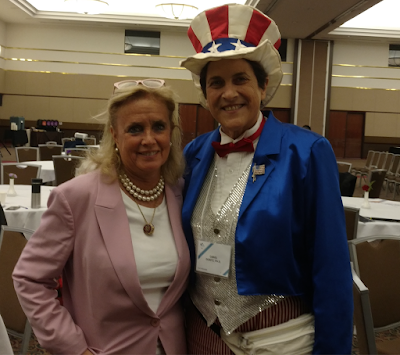 She presented the Michigan Progressive John D. Dingell “Heart of a Champion” Award to State Senator Stephanie Chang. I heard Debbie speak last week Downriver. She really moved everyone and spoke with great passion and determination.

Beyond all the programming, I had the opportunity to meet a number attendees, many of whom are actively working in the nonprofit arena. I also shared a few business cards and news about 2020: The Musical.
Posted by Carol Dunitz at 6:18 PM