Every year hundreds of American journalists, humanitarian aid workers, tourists and business people are taken captive by terrorist groups, criminal organizations and foreign governments. Sadly, we work in an age where there is a growing risk to journalists and aid workers who work abroad.

The Wallace House at the Gerald R. Ford School of Public Policy arranged a panel discussion about being taken captive and how the US and other countries deal with these situations. Margaux Ewen served as moderator. Diane Foley and Joel Simon addressed the issues. I attended to learn more about US policies about negotiating with terrorists. 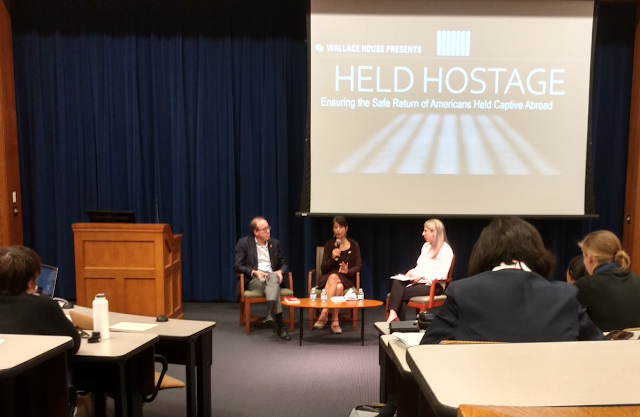 Diane Foley founded the James W. Foley Legacy Foundation in September 2014 shortly after her son, a freelance journalist, was executed abroad by a terrorist group. She told the audience about her efforts to fund an International Alliance for a Culture of Safety. At the present time, the United States has a policy that allows negotiation with other countries and with criminal groups, but it will not negotiate with terrorist groups.

Joel Simon is the executive director of the Committee to Protect Journalists. A former journalist himself, he spoke of the cruel consequences when some of his friends were taken hostage and the US refused to negotiate. Simon also talked about some research that has been done on negotiating with terrorists and criminal groups.

Diane Foley and Joel Simon shared their views and what they have learned about negotiating with terrorists. Brutal executions of men like James W. Foley and Daniel Pearl who were simply doing their jobs as journalists underscore the need for the United States to change its policy on negotiating with terrorists. Spain, a country that does negotiate with terrorists has had a 100% success rate bringing its citizens home following detention by various groups. France, too, negotiates with terrorists and has had a success rate above 70%. Only 30% of US citizens detained by terrorist groups survive their ordeals because the US refuses to negotiate.

The issue of dealing with those who have been taken hostage is a complicated matter. But perhaps it is time to rethink the policy instituted by Nixon when a terrorist group called for the release of Sirhan Sirhan, who was convicted of killing Robert F. Kennedy, in return for hostages that group held. In that instance, Sirhan Sirhan remained in jail but all the hostages were killed by their kidnappers.
Posted by Carol Dunitz at 9:13 PM